This week’s readings explored the concept of the future of art, how it evolves in sync with media and how it affects social processes and personal subjectivities. The articles by Armstrong (2005) and Whitelaw (2009) seems to concentrate more on the subject of how new digital technologies implicate media for art. According to Whitelaw, the concept of transduction as transformations between different energy types use computing to create motion-based artworks.

The Museum of Me showing a collection of photos

Similarly, intel developed an application for facebook, “A Museum of Me” whereby users are able to visualise their activity on the world’s largest social network.

To me, I feel that this is a good example of a new artform that engages and interacts with us. The exhibition is a journey that the user undertakes, exploring who “I am” as the video takes a tour through the virtual museum. This concept also explores the concept of archives, except that the user is able to engage and interact with it.

This is an example of a Virtual Tour of My friend’s facebook profile. 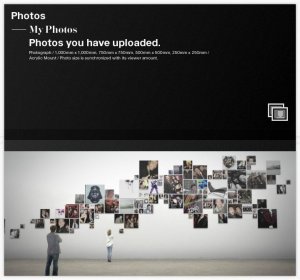 As the tour commences, users walk through “rooms”, showcasing pictures and videos of friends from their profiles. A collection of ‘status updates’ and ‘comments’ posted on their wall is displayed. The next “room” shows the user’s location on a virtual map.

By collating the comments and status updates on one’s personal wall, the most frequent word used is also shown to the user. This gives an idea of what the person’s personality is like and what topics are most frequented in daily rants and conversation.

The museum essentially helps the viewer to visualise all activity on facebook and this is an example of the idea of a variety of transducers, whereby a number of mapping out links between data, information, kinetic, optical and acoustic energy is viewed.

In the documentary by Shalom, on The Future of Art, he notes that new art showcases ideas behind art rather than technology as art. He explains that the democratisation of online media, increased knowledge and infrastructure for storing, processing and organising data has also simplified the role of the curator to mere selection rather than meaningful organisation. The “Museum of me” essentially does this, whereby one’s data is selected and presented as a virtual art form, which transcends into visual and acoustic transduction.

Similar to my previous post on augmented reality, art forms are also starting to resemble a particular performative vision. New layers of reality are being introduced into our personal space as a section of a transversal unit between reality and non-reality, wavering between our subconscious and conscious experience. In conclusion, when we consider the mimetic, collaborative and live nature of new media art, we can start applying Richard Schechner’s radical concept whereby the world is “a space for both an actual playground and the conceptual arena” (Schechner, 2002).

This is a video I found interesting, it showcases how we are able to make patterns and music on an interactive website called the am laboratory whereby a “simple sinewave synthesizer is triggered by an ordinary  16step sequencer” (Michelle, A. , internet).

W13A
View all posts by anaonko →
This entry was posted in Uncategorized. Bookmark the permalink.